Cooking Without A Net – The Art Of Letting Go 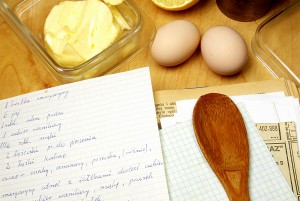 The Recipe Says . . .
I am a recipe follower. My husband, he’s more of a recipe avoider. And it drives me crazy in the kitchen. Witness this recent conversation in the middle of making Spaghetti Carbonara:

Me: “Oh, the recipe says to put in two cups of chicken stock.”
Him: “Yeah, well, I don’t always follow the recipe.”
Me: “You don’t always follow the recipe.”
Him: “Nope.”
Me: “So, let me see if I understand you: a trained chef, someone who went to school to learn how to cook, went to the trouble to research how to make this dish, and offers us this perfected recipe, and you choose to not follow it, to make something up?”
Him: “Pretty much.”
Me: “But I like the way it tastes when we follow the recipe.”
Him: “Me too. But I also like to do things my own way, try something different, cook without a net.”
Me: “Well . . . that’s just stupid.”

Actually, deep down, I am really more of a baker than a cook. Because baking is chemistry, and so it has rules, parameters, and predictable outcomes. See, I don’t mind if the ending comes out the same each time, so I don’t need to try something different. In fact, I really like knowing what’s coming; I like that if you do A and B, that C will then predictably follow. Like a recipe.

So it probably won’t surprise you to learn that I am a rule follower in pretty much every area of my life. My husband, he’s a . . . well, he’s not really a rule avoider. He’s more of a rule questioner.

Oh, he follows all the really important rules, like the ones having to do with being honest and kind to people and generous with his resources. And most of the traffic ones. But he’s a little undisciplined about some of the other ones. Like the one that tells you how much chicken stock you should use in Spaghetti Carbonara. That’s two cups, in case you weren’t paying attention. 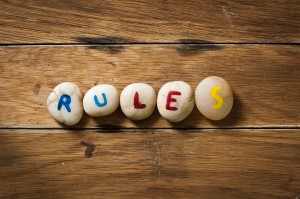 I Want the Net
I am so into rules that if I can’t find one that will apply, I’ll invent one. No, really. I do this all the time.

For instance, it’s a rule in my house that the flap on the toilet paper roll has to lay on top of the roll, not under it.

It’s also a rule that my clothes need to hang in color-coded order in my closet.

And when I put my shoes away, the rule is that they have to go together insole to insole, as if they were on somebody’s feet. Seeing them the other way creeps me out.

Truly, I think I like rules and recipes because I am, at the bottom of it all, deeply afraid. I’m afraid of letting go, afraid of not being in control, afraid of failing, afraid of the unknown. Afraid of leprechauns. You name it and I’m probably afraid of it.

Having rules to follow makes me feel safer, more secure, and keeps the fear at bay. And so I want the net.

But I do admire my husband. He’s apparently not so afraid all the time. And his courage gives him the freedom to question some rules, to play around with which ones are important to follow and which ones have some wiggle room, to risk failure in order to try something new. He doesn’t have any problem letting go of the rules, letting go of control.

It occurs to me that people like my husband are okay with not knowing the ending to the story, because they know they’re helping to write it.

That sounds kind of cool. A little scary, maybe, but still pretty cool. So I wonder: could I be more like that? Could I move past the fear and the rules and live a little more on the edge? Could I get better at letting go? Could I cook without a net? 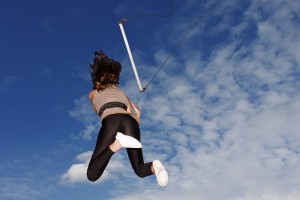 Brussels Sprouts Without a Net
I recently tried to do this in a small way. My husband and I were having a dinner party, and it was my job to prepare the Brussels Sprouts. I love Brussels Sprouts, but was tired of our usual recipe, so I went looking for another one.

I found a recipe I liked (with balsamic vinegar and grapes – yum!), but it was not really a recipe at all, more like loose guidelines – suggestions, really – about what ingredients to use, and not even a rough estimate regarding amounts.

Really, people? How is this supposed to be helpful?

I almost chucked the whole idea. The possibility of failure was just too imminent. What if I didn’t prepare it correctly? What if I screwed up the amounts? What if our guests hated it?

But I couldn’t find a better option, and I really wanted to try something new. So I poured myself a martini, took a deep, cleansing breath, and decided to try, just this once, to proceed without any rules. No A plus B, no obvious C, no assurances about how the story would turn out. No net.

Big surprise. The sprouts turned out okay. Pretty good, even.

So, I guess maybe someday I could learn to cook without a net. And maybe I could also learn to do other things without so many rules involved, without knowing the ending to the story. I could get better at letting go.

Maybe. But later. Because first I need to flip some toilet rolls.

—————————————
What about you? Are you a rule follower or a rule questioner? Have you attempted to work, play, or cook without a net lately? Tell us about your experiences below.

This entry was posted in Letting Go, Out Of My Mind and tagged following rules, habits, handling fear, letting go of control, self-improvement. Bookmark the permalink.