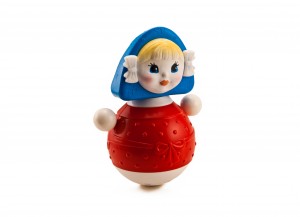 Many of you who were young in the 70’s will remember playing with Weebles, those delightfully wobbly egg-shaped toys that came in a variety of characters and figures. My small set was comprised primarily of people-shaped Weebles, but the stores also sold animal and storybook character versions, among others.

Regardless of the appearance of the egg-shaped doll, its main attraction was that, despite its tendency to careen wildly out of balance when you pushed it, it was impossible to actually push the thing all the way over. Hence, the Playskool marketing slogan above.

Didn’t you always wonder what kept those little guys balanced, and allowed them to pop back up whenever you tried to tip them over? It turns out Weebles were designed specifically to be able to repeatedly achieve something called “mechanical equilibrium” (which is engineer-speak for “Weebles wobble, but they don’t fall down”). They can never permanently lose their balance.

In a previous post I told the story of my family’s recent geographical move and the way in which it both disrupted and enriched my life. One of the things I learned about myself in the midst of all that change was how out of balance my world had been before the move. Don’t get me wrong. I loved my life during our New York years. I had two very fulfilling jobs, several artistic and athletic hobbies, and the care of two wonderful, if challenging, adolescents, each with their own set of varied and interesting pursuits.

If someone had suggested to me at the time that my life was out of balance, I would have fervently disagreed. Sure, my dance card was pretty full, but everything I was doing was important to me and fed me on some level. I would have been hard-pressed to name a pursuit I was willing to give up. Plus, one of my biggest personal strengths, if I do say so myself, is that I am a great organizer, and so I was able to juggle all of these responsibilities and still keep my sanity. Or so I thought.

Our move, not surprisingly, afforded me some perspective. I realized soon after the transition that the aforementioned life, although full and rich, was also wildly out of balance. 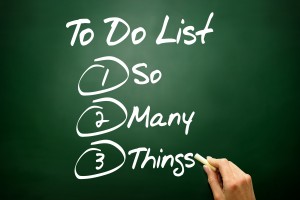 While in the middle of things, I had told myself I was coping well with all my responsibilities, and could point to a series of daily, weekly and even yearly accomplishments as evidence of this. But the real truth, that I could finally see through the more objective lens of some physical and emotional distance, was that I was exhausted much of the time, exasperated and short with people, didn’t sleep well, and had mini anxiety attacks on almost a daily basis.

I know, right? It seems like I should have noticed something was off. The problem was, I was so IN my life at the time that I couldn’t see the pathology of it. I needed time and distance from my day-to-day responsibilities to help me see what was really happening to me in the midst of them. Once I could see, even feel, the truth of things, I realized I had the ability to course correct, and I begin to make a few changes.

“We can be sure that the greatest hope for maintaining equilibrium in the face of any situation rests within ourselves.”
Francis J. Braceland

Back in those New York days, when my son and daughter were about 10 and 12, respectively, we went as a family to see the movie Spy Kids 3D. This was the first 3D movie experience for most of us, my son included. The movie was a good family flick, fun and fast moving, if not too intellectually challenging, and the 3D experience (dorky glasses included) heightened our enjoyment of the story. But as we were leaving the theater, it was clear my son wasn’t feeling well.

He said he felt dizzy and sick to his stomach. Thinking he had eaten too much popcorn (he was 10, after all), we comforted him as best we could and headed home. This is where things got a little scary. As we made our way home, my son became more and more altered, still off balance and nauseous, but now alternately unresponsive and slurring his words. We changed course and headed for the emergency room.

One look at my son as we entered the emergency room doors and a woman waiting there opened her eyes really wide and (graciously) indicated he could go to the head of the line. Okay, so that was REALLY scary; it’s not a good thing to look so bad that someone thinks you should move to the head of the emergency room line. Finally able to see my son in bright light, I saw why the woman looked so concerned. He looked weak and lethargic, seemed barely to be able to stand, and his face was pale with an icky green cast.

Thankfully, my son was seen fairly quickly and eventually diagnosed with labyrinthitis, an inner ear disorder resulting in a loss of equilibrium, nausea and fainting symptoms. The doctor on duty said his condition was probably a reaction to the 3D movie experience*, and predicted that with time and rest his symptoms would abate. Sure enough, by the time we left the hospital my son was feeling more like his old self. And by the next morning, his body was completely back in balance.

“Be aware of wonder. Live a balanced life – learn some and think some and draw and paint and sing and dance and play and work every day some.“
Robert Fulgham 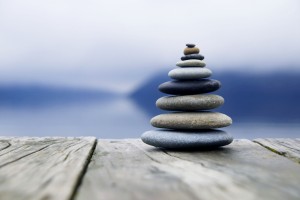 Like Weebles, I think humans are also designed to be able to continually return to a state of equilibrium. In the case of my son’s labrynthitis, time and rest eventually allowed his body to regain its sense of balance. But sometimes it is not enough to wait for our body to take care of things. Sometimes we have to step in and create a space in which we can see and feel the ways in which our lives are uneven or off kilter, and then begin the process of straightening things out.

Now, although it worked for me, I don’t recommend that everyone move half way across the country so you can see the out-of-balance places in your lives more clearly! But I do recommend the habit of occasionally making spaces in your life in which you can hear and respond to that inner voice that tells you things are way off. Some possibilities:

These are just a few ideas. You will, no doubt, come up with your own. Whatever you do, find a way to hit the pause button, breathe and ask the questions:

And then make the necessary change(s). The process may not be easy. Some people or activities, even important ones, may have to go. But, in the end, the harmony you gain will be worth the loss.

Go on. Get in touch with your inner Weeble. Stop careening back and forth and find your equilibrium.

*Although the connection seemed a little sketchy at the time, it turns out the doctor was on to something. Some studies seem to show that the unnatural eye-movements demanded by 3D can cause the eyes to work harder than usual, and it is possible for some people (children, especially) to experience a physiological response similar to motion sickness after watching a 3D movie, with symptoms such as dizziness, disorientation, nausea and loss of balance. Parents, you are hereby forewarned.

This entry was posted in Balance. Bookmark the permalink.

2 Responses to Weebles Wobble – Thoughts About Balance In Life